As part of my #maternityCPD (and obsession with anything Victorian shaped!) , I took a trip to Southwell Workhouse with Ted. Restored and maintained by the National Trust, the building alone was incredibly striking. Stark against the backdrop of rolling countryside and its own impressive sustainable gardens, I wondered how it must have felt, walking up to admit yourself or even your family to such a place. The irony of the title ‘Greet House’ is inescapable.

I was informed by our guide that many arrivals were the elderly that simply had no other source of welfare. As part of the tour, we were provided with details of admission and discharge of various residents; as you can imagine, many do not tell a happy story. 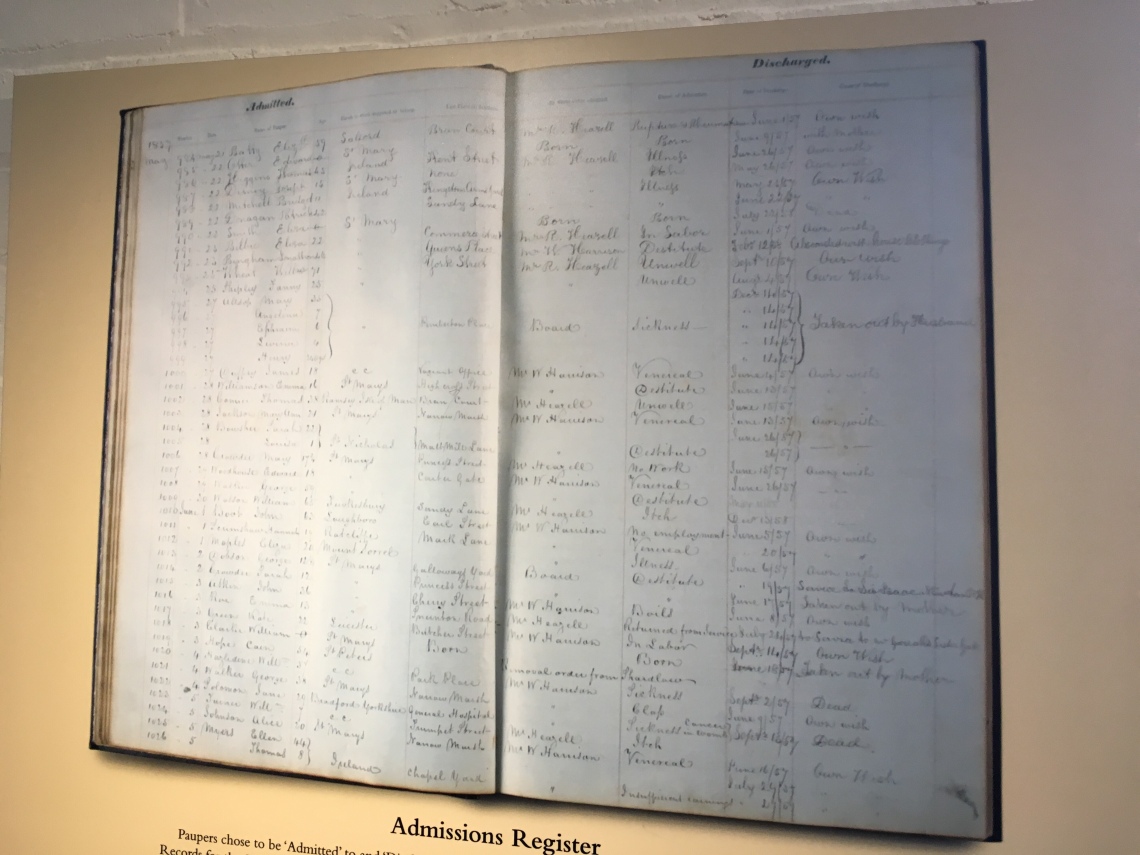 Several of the names on the admissions register left in death, or the book was marked with ‘own wish:’ to what extent that was true, you have to wonder! The rules alone were somewhat laborious and punishment was harsh. Throughout the entire visit, I struggled with the ideology that the presence of the workhouse could be viewed as a positive addition to a community, which is how it was portrayed in parts. One family asked for admission whilst their father was ill in hospital; when he recovered, he sent for them. Was this place a far cry from the anguish of London workhouses of the era?

That may be exactly so. Southwell housed 160 residents from 60 parishes- a world away in destitution and desperation of the sometimes 1000 strong holdings in London. Those that stayed were given three meat meals a week, an exercise yard and their children were educated. If behaviour was good, they could spend time with their children on Sundays. As a parent, I could see why in such times of poverty, the workhouse was not just a place of last resort for some- it wasn’t that black and white. 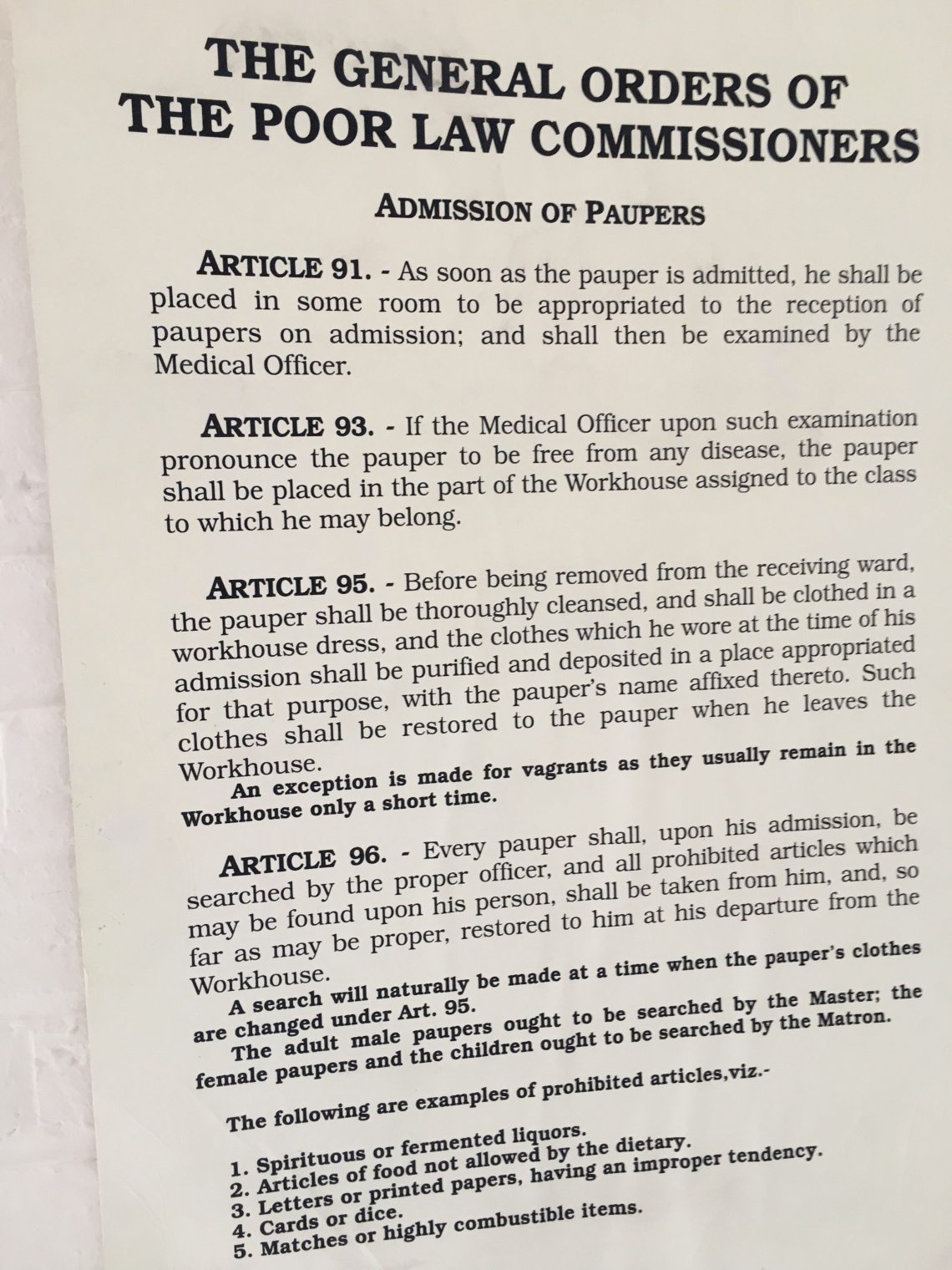 However, there were remnants of information that held helplessness and despair to their tales. Inmates were given the task of ‘getting money for old rope’ for the master- pulling the tar from ship rope purchased at a minimal price and reselling back to the ships for insulation for a tidy profit. Their hands would bleed, but the work itself was a replacement for bone grinding. This task was discontinued after starvation reached such a point in a workhouse in Andover, Hampshire that inmates were eating the decaying meat from the bones as they worked.

‘The Dead Room,’ held corpses as the uninventive name suggested – these bodies were then transported by horse (at a cost to the Master) to Upton to be put into a mass, unmarked grave. To save the budget, bodies were held for weeks at a time to transport en masse. It seemed not only clearly inhumane, but what would be an distressing reminder to the other inmates as to what might inevitably become of them once it was their time to be discharged.

With my English head on, two pieces of literature stood out for me to ponder over. The first, a quotation from the founder of Greet House, Reverend JT Becher,

An empty workhouse is a successful one”.

It takes me back to Ebenezer himself, as the words,’are there no prisons? Are there no workhouses’ are thrown back at our protagonist as he makes his journey to redemption. Did Belcher truly feel that he was making a positive impact upon his community? As a man of God, did he see such people as individuals that required saviour? The quotation could be interpreted as such- was he suggesting that all poverty could be resolved with the inclusion of such systems within society? Or was this someone that saw poverty as a disease that only he could cure?

The other piece of writing – rather unsettling to read that it was a nursery rhyme. Remember ‘Ring-a-ring-a-roses?’ It was ever so slightly more implicit than this creation:

The rhyme was like a derogatory version of ‘Monday’s child.’ The song demonstrated the harsh isolation and segregation that the female inmates must have felt, separated from their children once they turned 2 (several women were admitted in the throes of labour) and with little hope of prospects beyond those four walls.

I left Southwell wanting to know more about the individuals and their stories rather than rules and regulation- it appeared that there was more scandal than I realised. The Education Inspector’s visit in 1848 was less than satisfactory:

However, it appeared to be the tip of the iceberg. It came to light that the Master, William Sumner and the Mistress, Maria Richardson had engaged in a relationship that held a ‘low tone of morality,’ resulting in Ms Richardson becoming pregnant. Mr Sumner was 17 years her junior. Both had regularly entertained friends at the workhouse for dinner parties on the workhouse budget! It must have been quite a day- a hypocritical one at that- as inmates watched them cast out, jobless and destitute themselves.

All in all, a really informative day that opened my eyes to the complexities of Victorian poverty, and the convoluted ways in which they sought to solve them.

I write about the things I think about. View all posts by saysmiss

This site uses Akismet to reduce spam. Learn how your comment data is processed.